CRANES Usabiaga, SA is a service company dedicated to self-propelled crane rental, erection of steel structures, concrete and prefabricated beam placement and retrieval of blocks for training and reconditioning of breakwaters, dredging of harbors and inlets, and special transport transport turnover National road goods in general.

In Usabiaga Cranes, SA also bring machinery engineering projects to meet the needs of the customer. Where other companies are limited to renting equipment Cranes Usabiaga, SA from the project and the expertise required to perform the work requested.

Cranes Usabiaga, SA is headquartered in Ordizia (Guipúzcoa), which was established in 1987. Since its inception, the main objective of the company has been to provide quality customer service, both in treatment and in service, and the proof is to obtain in 1995 the quality certificate ISO 9002, and currently has the ISO 9001:2000, ISO 14001:2004 and OHSAS 18001:1999.

The headquarters, located in an area with excellent communications, in the heart of the transport sector and elevation, provides central facilities, three buildings for use as garages and workshops, a building that houses the offices and technical management, an annexe to the accounting section and land space for storage of the various structures used in the assemblies.

This company has been growing continuously and safely in the market. Passing of the four cranes with which began operating in 1987, currently have a fleet of over 100 cranes in the six centers that are currently crane companies Usabiaga Group. 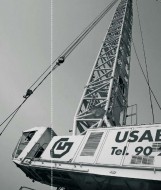 Cranes Usabiaga SA holds a leading position in the sector. It has a modern machine park and a repair shop fixed and three mobile workshops with two groups of mechanical experience, we specialize in a crane and the other in trucks. The efficient and rapid communication between managers and operators work optimizes performance at work. Cranes Usabiaga s at the forefront, a leader in the sector. Usabiaga Cranes has a modern fleet of trucks and cranes equipped to carry out any work, from small 10-ton cranes GROVE. even the crane 2000 LIEBHERR Tn.

The main field of work Usabiaga Crane SA consists of:

Its strong European vocation and experience in France, has made its customer base the form of both national and international companies of recognized standing, or the public and private sector.