20 The whole team lanzavigas is conceived and designed by Cranes Usabiaga for mounting precast beams for bridges and viaducts.

The set lanzavigas is an instrument designed for the assembly of precast beams for bridges and viaducts. In short it is a bridge crane with lattice modular beams composed of rectangular elements. These can be connected to form two beams of 120 m in length. It has two lift trucks of 100 tons capacity each to move the load along the two lattice beams. The difference with a conventional crane trucks shuttle is in each of their support. Unlike translation carts, which allow only longitudinal movements on the beam rail, these possible translations of the lattice girders in the direction perpendicular to the beam rail. In this way the whole lanzavigas placed on an opening bracket or has been mounted, it can be released to the next. Elements of the set lanzavigas 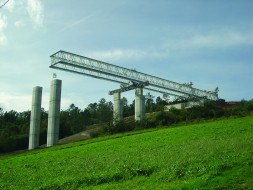 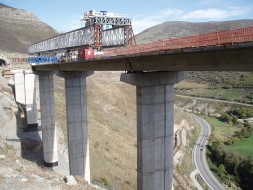 Formed by two beams HEB 600 braced together by a square of side rail 30 mm in the upper wings. Placed caps on the ends of beams to prevent the joint out longitudinally. A distance of 1030 mm wheelbase HEB beams, gives overall dimensions 1330 mm wide, 630 mm in height and length of 15m, 17m and 20m which are used depending on the width of the lintel of the structure to be ride.

Chains rated load 10 tons quer lane beams together fixing lugs in safety plugs and anchors on the board to the doorposts in anticipation of the possible side beams rollover lanes.

Trusses consist of rectangular sections of 1.1 m wide and 4.2 meters high and 20 m long. The modules are formed by two beams IPE 360 in the upper chord and two beams IPE 500 at its bottom chord. With twelve modules of 20 m can make two blades of 120 meters in length.

They consist of two racks with 4 grooved wheels mounted on bearings. These racks are joined together by a bolted swing so that the resulting element is a dual carriage with bearings on opposite sides and perpendicular directions. The upper rolling cart allows truss to move in its longitudinal direction, the lower bogie moves the whole in the direction of the beam rail. Clamps placed on the sides of cars rolling bearing profiles embrace lanes running in both directions preventing possible derailment.

The whole beam launcher has two lift trucks consist of a frame with two grooved treads two wheels each that can be adjusted so that treads distended 5m, 6m or 7m between themselves depending on the separation which are mounted the two lattice girders. The winch, engine, gearbox and hook mounted on each carriage resulting in a lifting system which has the following characteristics:
Capacity: 100 tons.
Lifting height: 10 m.

Metalware porch as closed-section profiles are placed at the ends of lattice girders. These unite in solidarity between the two trusses. 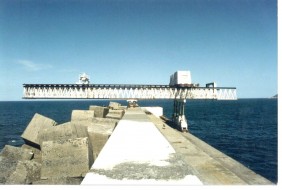 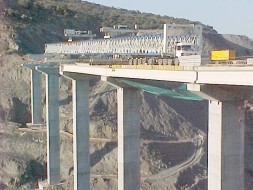 Conditioning step 1 (taller bracket) for the installation of all lanzavigas.
Will need to have an area of 65m long in the direction of the viaduct to ride
x 25m in width along the bracket about input beams, equipped for
stand the test of cranes and trucks that are used during assembly (axle loads of 20
tn approximately). • Download the material in the assembly area. The material is taken to set lanzavigas
Jobsite loaded onto trucks and download them using small cranes
tonnage

Main beams will be shifted using the engines of cars translational, throwing them into the doorway to ride until the end of the porch vertical stack than where you place the dice on two meters grading.

The lift truck closest to the entrance portico laposición will move to a closer relationship to it. In that position will engage a ballast of 20 tons to modode counterweight.

Using the second lift truck, will be the modules that make up the dice leveling concrete, and assembled in three turrets on the lintel. This maneuver is repeated with the beam rail and trucks travel to stop the drive system mounted on the lintel.

The next step will be to support all lanzavigas on translation carts side inthe stack. For this set focuses on the beam rail bracket and ballast discharge of 20 tons. In this way with cars as a swing pivot on these and all cars will be supported on the bracket and battery.

One of the workers of all lanzavigas manipulate the keypad from the stirrup. Other operators will support the first indicating the positions of the complex from a point on the lintel. Need to have access to the lintel, and prepare a lifeline so that they can engage in it by the safety harnesses.

Lanzavigas whole, as its name suggests, is a device designed for mounting precast beams. Here are the moves to make in assembly

Attaching the second end of the beam to the second hook lift truck and the beam suspended from the two cars is carried on until the opening of an aperture in which is to be mounted. When attaching the side of the truck crashes the car 2 and the translation is done with the engine lift trucks.

The dolly is hooked onto the tractor and is removed from between the blades of lanzavigas to allow lateral movement thereof.

With an operator on the lintel and the other on the bracket / board is made lateral movements. • At this time, moving all over the beams lanzavigas lane, let the beam on the projection of the support and go down the hooks to allow the beam mounted on its supports.

The order of assembly of the beams of a span is usually the next. First are mounted on the ends. These are released to focus on the empty hole left in the same and get off the hook until they are about 5 inches from the height of the supports of the beams as an additional security measure, so that lateral movement of the whole the beam is a minimum threshold in anticipation of an accidental destabilization of the whole. At this time moving the joint rail beams take up his position at the ends of the span. Mounted the end, we continue riding the other, from the ends toward the center.

Mounted span beams, plates placed formwork, rebar and concrete board, move the set lanzavigas to place on the following vain. Lanzavigas whole is mounted on the compartment in which the beams have been placed and has concrete slab. On the one hand, the beam rail (beam lane 1) will be supported on the board of the opening above and on the other (beam lane 2) on concrete cubes were used to level the set lanzavigas.

In order to place the pitcher on the next set vain to mount, will have to do the following: With all lanzavigas centered on the longitudinal and transverse mounted vain, and lift trucks placed at the opposite end of the entry of beams, power translation engines longitudinal joint that moves to the step input beams. We will make this movement until the geometric center of the lattice formed by the blades set on the beam launcher rail is placed on the board. The auxiliary crane will be placed on the board, focusing on this, next to the entrance portico of the whole beam launcher. The auxiliary crane, place the counterweight 25 t between the two blades of the whole pitcher of 2m of the entrance portico. The crane auxiliary hook launcher all the entrance portico and tighten the shot to take a load of 1 t. 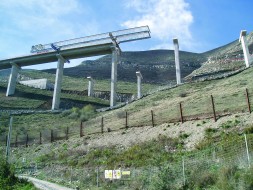